When I was a kid, about 11 years old, Star Wars had just come out and was a huge hit before the term blockbuster had really been coined. Our teachers would often ask us why we were bringing little statues (action figure) into the classroom. They were wholly unaware of the delights of George Lucas’ newly minted masterpiece, and how badly my friends and I wanted to fly off into space. We all wanted to be Jedi.

There weren’t a lot of toys available for young Star Wars fans. It was said in the newspapers and magazines where I would seek out new information about this exciting new universe that George Lucas would not license any of the blasters or Light Sabers because they were weapons of war. I have no idea if that is to true or something created by a fevered newspaper man’s imagination. But though a few action figures and other things trickled into toy stores, none of the weapons wielded by the heroes we’ve come to love were anywhere in sight. So when I ran across an ad in TV Guide for obviously unofficial “Light Swords” I got my parents to send away for one right away.

I waited for several weeks patiently, and what I got in the mail a while later was basically a flashlight with a flimsy plastic cone attached. It actually was rather fun, lit up nicely and I was able to duel with others who had bought the same toy, although the two tended to bend under the strain of young Jedi training. Even so I have fond memories of firefly-filled evenings spent with the back porch light turned off, and the sounds of a young Padwan struggling to learn the basic moves (ie: look cool) of his dangerous new glowing weapon.

I recently walk into a bookstore and saw the Star Wars Force FX Lightsaber for myself. I got to pick one up and heft it. I think I was expecting it to feel much like my old T.V. Guide “Lazer Sword”. Instead I found a rather weighty item with a solid, beautifully bright “Blade” (a far sturdier and thicker grade of plastic tubing with bright lights filling it with magic from my childhood dreams) and an overall beautiful design.

Now the light saber that I saw in the bookstore was more than twice as much as the Entertainment Earth Star Wars Force FX Lightsaber Construction Kit, and did not allow for different configurations of the handle. So forget 1970’s TV guide ads and weapons makers at Mos Eisley (it’s really turned into a hive of scum and villainy these days) and head to EntertainmentEarth.com for all you Jedi needs. 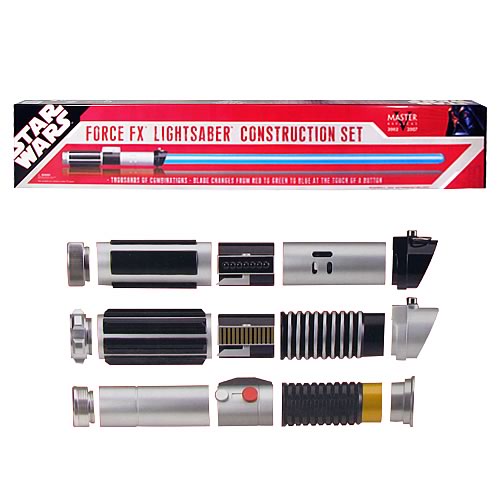 Baz Anderson is the creator of PopCultureOfDestruction.com

Published in squee and Star Wars