First of all, I have to say that I fail. Because, while I got this adorable pic of this adorable girl and her adorable murloc, I came home with only a pic of either ;-( 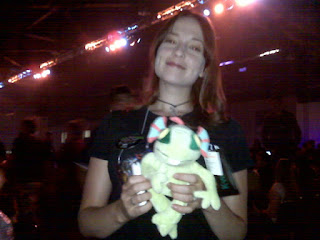 Still, I got the shot while waiting for the Opening ceremonies on Friday and it was a great way to pass the time.

I’ll keep it short, because if you were reading the tweetstream, I already know I was verbose enough for everyone.

So, all in all, had a blast. We didn’t stay late on Saturday, so I missed the panels later Saturday and I didn’t get to see Ozzy, but I got reports on everything and it sounds like everyone had a blast.

I already know there are more informative recaps out there, but this was mine and…hey, it had a cute pic in it!