During a chat with my boss this morning, we got on the subject on Twitter and how “things were going” as far as social media.

See, when I started this whole thing back in January, I was a noob when it came to most of the online/social media stuff and so I set about learning as much as I could. Over the last 10 months, I’ve met some amazing people and I’ve had an awesome time.

But I’ve never never really had a way to prove whether or not anything I was doing was actually, you know, working. I just have this sense that I’m doing things “right” and I go about my business trying to be as open, honest, generous and quid pro quo as possible any time people throw a little love my way.

In all of my time on Twitter, I’ve never done any kind of follower push for myself. I’ve helped other people, sure, but I never really had a magic number I wanted to hit so I never asked.

That was until this morning when my boss challenged me to hit 5000 followers.

(If you know me at all, you won’t be surprised that I audibly “eeped!”)

However, I was able to wrangle a 100.00 Entertainment Earth Gift Certificate as a prize. *And yes, any of my followers can win it, not just the new ones. 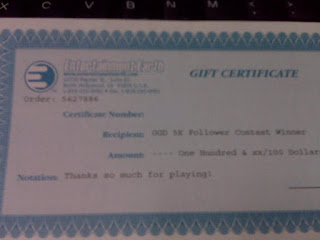 So, yeah, the goal is 5K followers on my @geekgirldiva account.