I remember watching Tim Burton’s Batman remake / reimaging back in 1990 and being so thoroughly creeped out by Jack Nicholson’s Joker that it actually gave me nightmares. He brought the quality of a cool and calculated lunatic to the role in the way that Jack can only deliver. I always thought it was a shame he was killed off in the very first movie; he was the perfect foil to Keaton’s Batman.

And if I might digress for a second, I think Michael Keaton made a brilliant Batman.

Until recently, I always thought Nicholson set the bar so high that no one would ever surpass it.

Fast forward to 2008 and The Dark Knight.

When I first heard Heath Ledger was going to play the Joker I has some serious misgivings. I mean this was the guy from 10 Things I Hate About You and Brokeback Mountain endeavoring to reinvent the role
defined by a legendary actor like Jack Nicholson? I was not
instantly sold. Watching the movie totally blew my mind. Not only did he rise above the heights attained by Nicholson; he took the role to a whole different place; one pertinent and interesting for this modern age. Ledger’s Joker was more an exploration of the Joker as a terrorist and agent of chaos than the Joker as homicidal criminal bent the downfall of the Batman.

One of the hallmarks of the Joker is, of course, the Joker card left at the scene of a crime. In commemoration and celebration of the Joker character from The Dark Knight, DC Direct has produced a limited edition Batman Joker Poker Set for sale at Entertainment Earth. 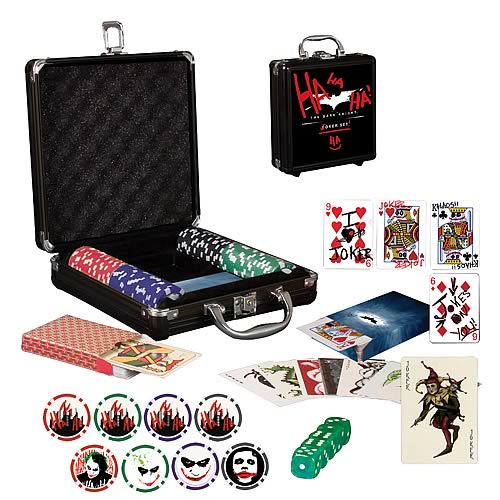 This unique collector’s set comes packaged in a black aluminum carrying case. It includes a deck of 54 replica Joker cards, as seen in The Dark Knight, and a standard 54 card deck as well as 100 poker chips in green, purple, red, and black, and 5 dice. Only 3000 of these sets are available and all are shipped with a certificate of authenticity.

What better way to put a unique spin on poker night than with this fabulous set? A must have for the Batman fan in your life or for any one that loves the unique story of this DC villain.