A toast to the technology and foresight of the Voyagers

I’m a NASA nut. Not the pensive, slow moving, budgetarily restrained organization of today, but the horn-rimmed short-sleeve-wearing smoking crew from the 1960s and 70s. They kicked out machinery that’s still in use today, and it’s high time we honor a few of their cooler inventions. Namely, those two far-out bretheren we call the Voyager probes. 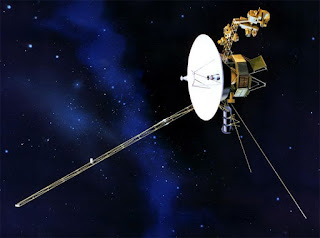 Whether you’re a fan of the slower, yet more well-versed Voyager 2, or it’s pioneering, faster sibling Voyager 1, the two little craft are still out there, hurtling towards the unknown in opposite directions, occasionally sending back tidbits of data to the horn-rimmed denizens of NASA.

I’ve always felt a kinship with the Voyager program — maybe it was because they were launched when I was just a kid, or maybe it’s because, like me, they’re destined to keel over and die around 50.

The little probes were incredibly advanced at the time, although the equivalent technology (then the size of a Fiat) is now pretty much free with activation and a two-year contract. Each sported a camera (technically, a wide- and narrow-angle) and a triple-core processor running at a whopping 6.4MHz. For comparison, you hipsters with new iPhones are running 600MHz processors. Data was transmitted at a whopping 160 bits per second (my 1984 Commodore 64 modem transmitted at roughly twice that).

The one thing Voyager 1 and 2 did have going over today’s technology was battery life. Each was powered by two small nuclear generators, and each has a functional power span of about 50 years. (Think about that next time you forget to plug your phone in.)

Of course, most people breeze past the technical details to get to the sexy, which in this case, is a gold record containing pictures and sounds from Earth. The Sagan-designed device was pretty thoughtful at the time, although the medium hasn’t aged gracefully. Hoping aliens will figure out how to play the record is asking a lot, considering most of Earth has long since lost the knowledge and ability to spin vinyl.

Whether they’re picked up by alien DJs or not, Voyager 1 is currently the farthest man-made object from home, and is now long past the solar system’s bodies, somewhere in the heliosphere (sort of like a giant cell membrane).

Neither probe is unlikely to approach another planetary system for 40,000 years, but, as Carl Sagan said, ““The spacecraft will be encountered and the record played only if there are advanced spacefaring civilizations in interstellar space. But the launching of this bottle into the cosmic ocean says something very hopeful about life on this planet.”

Josh is the founder of www.geeksix.com — a gestalt site for geeky lovers of movies, games, role playing, and pop culture. During his day job, he’s a newspaper guy, and has done a pretty convincing job of fooling everyone else into thinking he’s a non-nerdy, normal member of society.